Gold miners have been forced to cut costs as gold and precious metals trend downwards amid quantitative easing programs emanating from the Federal Reserve.

Without the cost cutting measures, which helped to push the cost of producing one ounce of gold down 23% to $1,331 per ounce in the year ending in March, virtually all miners would be in the red.

Citibank analysis of the data from five of the world’s largest gold producers, like Canada’s Barrick Gold Corp, South Africa’s AngloGold Ashanti Ltd and Australia’s Newcrest Mining Ltd suggests that this trend will continue. Most of the cost reduction has been due to slashing capital and exploration spending, cutting head office costs and shrinking mine plans.

“Even though this is a good short-term thing for the gold sector it is exactly the worst thing that they can do from a long-term value perspective,” said Johann Steyn, an analyst with Citigroup in Johannesburg.

As the gold price tanked and miners were forced to write down billions on underperforming assets, once growth-hungry investors demanded a new era of austerity. The subsequent cuts to exploration and capital spending threaten to shrink current output and future growth.

When gold starts to rise again, miners will find it harder to benefit if they have under-invested in new projects. Lower grade ounces will again become economic, and if mined as in previous upturns, will once again raise unit costs.

Other costs are still a sore spot for miners, such as labor, fuel and power, all of which increased 60% from 2008-2012 when demand for these key inputs skyrocketed during the global mining boom. Gold grades are also decreasing which has put pressure on operating costs.

What was once a booming space has now turned into a race to cut costs. Miners are no longer optimistic about exploration, they’re optimistic about cutting costs at mining sites. This has enticed hedge funds to look into the industry, but hedge funds would likely turn away if it weren’t for the cost cutting measures.

“There is more room to cut fat than there is muscle. I don’t think they are cutting into the muscle right now to demonstrate profitability. The companies have been so bloated,” said Chris Beer, co-manager of the RBC Global Precious Metals and Global Resource Funds.

Some argue a drop in production could help the gold price find a floor and set the conditions for a miner turnaround. This has led some hedge funds to dip their toe back into the gold miners. The sectors stronger earnings due to the abovementioned mining cost cuts has sent the NYSE Arca Gold Miners Index, which surveys 39 gold-mining companies, has increased 26% in 2014, compared with a meager rise in gold.

“Gold companies just don’t look as expensive as they did in previous years… and you have a sentiment that is warming toward gold,” according to Catherine Raw, a portfolio manager for BlackRock Inc.’s $451 million Commodity Strategies Fund. 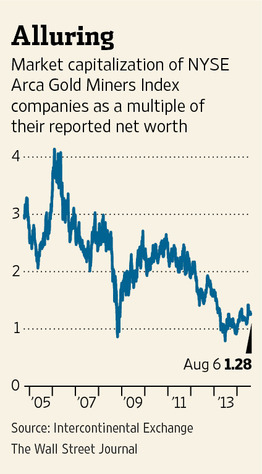 “The industry has done a lot of belt-tightening and a lot of soul searching, and is on much firmer footing that it was two years ago,” said John Hathaway, who manages $1.6 billion at the Tocqueville Gold Fund.

The dollar is near highs and precious metals have sagged as a result. This trend could continue which might make miners an enticing place to hedge physical gold and silver. Before precious metals miners, though, looking into a completely different sector than precious metals might be the right hedge. Like, say, crypto-assets.